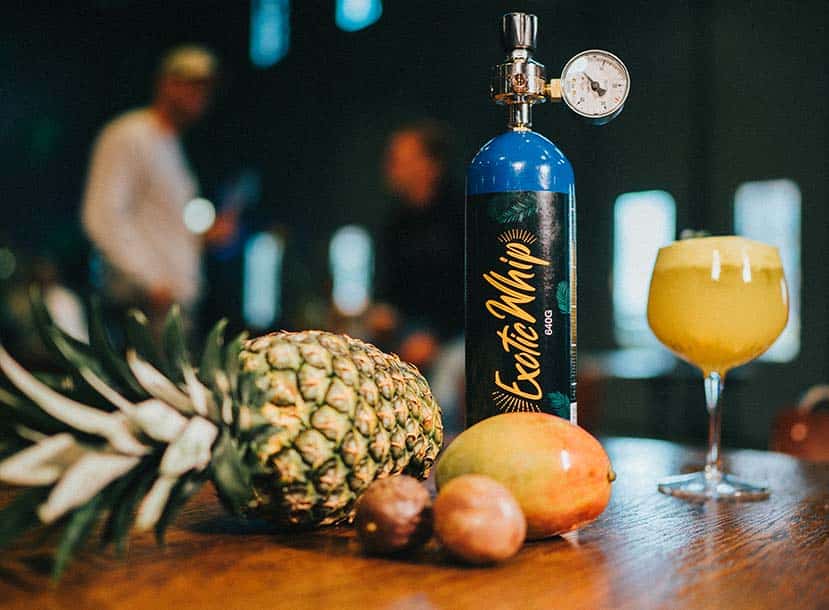 By adminSeptember 27, 2021January 17th, 2022The Biggest Cream Charger Knowledge Base Online
No Comments

Whipped cream is an essential component of many culinary preparations. It finds application in home kitchens, bakeries, restaurants, cafes, and more. However, the process of making whipped cream can be time-consuming and daunting, and also, there is no guarantee to get the best results every time – especially if you try to do it the conventional way.

Whipped cream is a type of cream, which is made from whipping cream, using a mixer or whisk. The cream is whipped until it turns airy and fluffy. This can also be achieved by the expansion of a dissolved gas, which forms a colloid.
Instant whipped cream is made in a whipping siphon, using a whipped cream charger. A gas, usually nitrous oxide (N2O), dissolves in the butterfat under pressure. When the pressure is liberated, the gas leaves the solution while forming bubbles.
Whipped cream is commonly flavored with chocolate, vanilla, sugar, coffee, orange, and more. It is a preferred topping for freshly cut fruits and desserts, ice creams, cakes, cupcakes, waffles, shakes, hot chocolates, pancakes, and puddings. It is also served over coffee and used as a filling in layered cakes. Especially in a bakery, it is released through a conical or cylindrical bag to create different shapes for decorative purposes.

What are Whipped Cream Chargers?

The basic working mechanism behind Whipped Cream N2O Chargers and siphon (also, called dispenser) is the same – whether you are using Kayser cream chargers, 600 Liss cream chargers, or any other popular brand charger. You can follow the simple instructions below to create perfect whipped cream at home in no time:

There are several benefits of using a 640 gram N2O Whipped Cream Charger from reputed brands:
A quality cream charger can preserve and keep foams and sauces fresh for a longer duration, thereby increasing the shelf-life of your foods.

Since your foams and sauces remain fresh for longer, these chargers allow you to prepare food in advance and save time.

Many top-brand cream charger canisters are fully air-tight that allow you to keep some types of mixtures, especially the ones containing dairy or egg, fresh for 5-7 days. Moreover, if you are using a charger in its professional capacity, the freshness of the mixture can be maintained for over a week.

You can also use our top-quality Exotic Whip cream charger to provide extra volume to any sauces or dressings that can’t be otherwise aerated. This further allows you to be creative with your recipes. Once the air is added to the mixture, it tends to stick to food items more easily, making the flavor stronger.
Most importantly what makes our ExoticWhip cream chargers unique from other conventional 8gm cream charges is that it comes with 3 subtle flavors like pretty pineapple, wavey watermelon, and passion fruit that makes your whipped cream aromatic and tasty.

Effects and Uses of N2O

Cream siphons and the food industry

What Is Nitrous Oxide?

A whipped cream charger and dispenser make for a great tool to prepare freshly whipped meringue, smooth and soft batters, airy foams, and salad dressings. Once you know how to use them in the right manner, you can start putting your creative side to work for making different toppings for your favorite dishes.

Welcome to
My Rewards

Join our loyalty program to unlock exclusive perks and rewards.